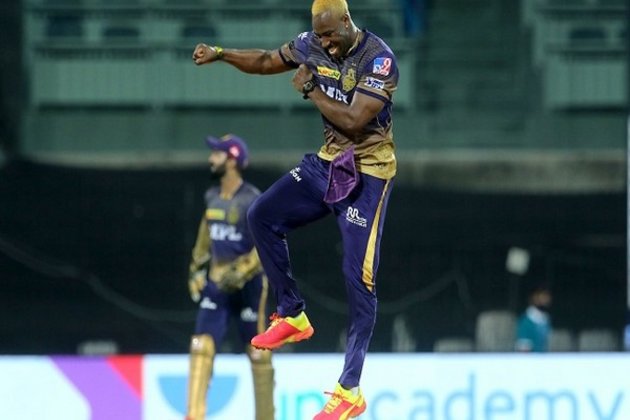 Chennai (Tamil Nadu) [India], April 13 (ANI): Suryakumar Yadav had laid a perfect platform to put on a mammoth total for the Mumbai Indians but Andre Russell's five-wicket haul restricted the Rohit Sharma-led side to 152 against Kolkata Knight Riders (KKR) here at the MA Chidambaram Stadium on Tuesday evening.

Mumbai Indians were well on the track to put on a good total but a flurry of wickets in the middle overs impacted their progress and the side collapsed from 115/3 to 126/7 within two overs.

While Russell, who took three wickets in the final over, stopped Mumbai Indians from putting on a big total, Pat Cummins picked the key wicket of Rohit when the batsman was set and ready to go all out on bowlers.

Put into bat, Mumbai Indians suffered an early jolt as the side lost opener Quinton de Kock in the second over. Varun Chakravarthy bamboozled the South African batsman on the last ball of his first over.

Skipper Rohit and Suryakumar then took on the KKR bowlers with 'SKY' leading the charge. The right-handed batsman smoked three boundaries in Harbhajan Singh's second over as Mumbai Indians recovered from the early strike.

While Rohit played a cautious knock, Suryakumar dealt in boundaries as he brought up his half-century with a six. However, after smashing the fifty, 'SKY' got out in an attempt to whack the ball around but failing to get all of it.

Ishan Kishan lasted just a couple of minutes, before hitting straight to Prasidh Krishna at fine leg as Cummins picked his first wicket of the day in the 12th over.

Two quick wickets jolted Mumbai Indians' progress in the game as the side scored 13 runs in three overs. Rohit did bring up Mumbai Indians' 100 runs with a six but the skipper departed in the 16th over.

Cummins struck again as Rohit chopped a slower delivery straight onto his wickets. In the very next over, Hardik Pandya, who looked out of touch, was sent back to the pavilion.

In the death overs, Mumbai Indians failed to get going and kept losing wickets at regular intervals. Russell dismissed Kieron Pollard and Marco Jansen in the 18th over as Mumbai Indians collapsed from 115/3 to 126/7.

Krunal Pandya tried to hit some shots towards the end of the innings but he faltered in order to whack every ball in the final over as Mumbai Indians touched the 150-run mark.